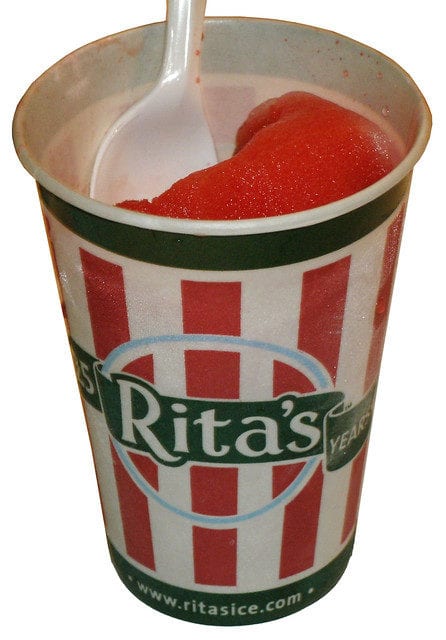 In Moorestown, New Jersey, the quiet suburb of Philadelphia in which I was forced to spend the first eighteen years of my life, winters were associated with hell, and summers with water ice.  As soon as the temperatures began their steady ascent past the sixties, usually sometime around the end of May, I would begin to pester my mother, “Let’s see if it’s open yet!” forcing her to drive by every water ice vendor in the vicinity on a daily basis.

Fortunately, by the time my birthday rolled around, in the second week of June, water ice season would already be well underway, and my parents knew better than to buy ice cream, popsicles, or any other subpar frozen confection.  Annually, large buckets of the icy delight would unfailingly line the edges of our backyard pool, red ice crystals glinting like rubies in the sun, because, of course, cherry was the best and only acceptable flavor.

While the pool was a welcome reprieve from the stifling, humid air, sometimes reaching into the triple digits, nothing compared to dipping a white, plastic spoon measuredly into a freshly shoveled cup of water ice, carefully filling only the top part of the spoon, and closing one’s lips around that icy mound, savoring the minute crunches of ice, blended to perfection with the sweet flavoring.

The best way to eat it was slowly, sometimes inverting the spoon so that the rounded bottom nestled against the roof of your mouth, pushing the serving of water ice into your tongue for more intense flavor and cooling.  This was done on repeat, while the rest of the water ice in the cup started to melt into a delicious, liquid moat, surrounding the remaining glacier.  I liked to work my way from the middle, creating a hole straight down, an inverse island, into which the syrupy liquid – the water part of the water ice – would form and be trapped, and then break off chunks of the surrounding icy exterior to fall into the liquid.  I considered myself to be a water ice connoisseur.

One particular summer day, in the mid-1990s, when the heat was especially oppressive and deadening, causing my grandmother and me to slump in our porch chairs in despairing silence, I suggested that we walk to get water ice.  That day, I had strongly felt that the closest water ice vendor, the Flying Feather Farm, down the road near the high school, would not suffice, and I insisted that we walk just a bit farther to the closest Rita’s Water Ice, a chain ubiquitous in that area, which was superior to all others because they added pieces of real fruit to their water ice.  I grossly underestimated the distance, and my ninety-four-year-old grandmother has never let me forget it since.  “We must have walked ten miles!” she likes to exclaim, laughing.  “You almost killed me!”  “It was worth it, wasn’t it?” I always solemnly reply.

Against my wishes, I ended up going to college not too far from home, at the University of Pennsylvania.  One silver lining was the continued ease of access to my dessert of choice.  On many a balmy summer evening, I’d take a solitary constitutional from campus in West Philadelphia down to South Street, about half an hour away, getting more excited as I passed 30th Street Station, the halfway point, and practically starting to sprint when I saw the large green neon letters spelling out Penn’s Landing.  Forget all of Philadelphia’s historic firsts; whoever created water ice had achieved the most important contribution to society of all.

“Water ice?” my first California boyfriend repeated, head cocked, in a tone of unmerited skepticism.   “What the hell is that? Isn’t ‘water ice’ redundant? That’s a dumb name.”  I was aghast.  To not be aware of the existence of water ice was bad enough, but then to insult it was downright ignorant.  He was originally from Ohio, though, so I figured there was a lot he had to learn about.  “Water ice!” I echoed, with a you know type gesture.   “I mean, it’s sort of like a slushie, or gelato, or shaved ice, but better.  It’s blended more finely, and the better ones have pieces of fruit.  It’s, I don’t know,” I faltered.  “It’s unlike anything else.  You just have to try it.  It’s perfect.”  I broke up with him, though, before he ever got an introduction.

The past fifteen years since I moved to California, I’ve repeated this same interaction, almost verbatim, with close friends, boyfriends, or whoever else happened to be in my company on one of those extremely rare days when it is actually legitimately hot in San Francisco, prompting me to exclaim, “Damn, I wish I had some water ice!”

I had accepted the fact that this was my trade-off; by living in the state of my dreams, with mild winters and temperate summers, I’d just have to sacrifice that refreshing staple of my youth, which would now be reserved as a special treat only for those rare times when I flew back to Philadelphia to visit my grandmother.  Water ice, my grandmother, and the occasional soft pretzel:  the only things Philly had over California.

Until this past August, that is.  My best friend had chosen to get married at a winery in Livermore, where, I soon discovered, summers still felt like the summers I had known.  On a quest to find waterproof mascara, I stumbled upon a large outlet mall nearby.  As I strolled past various clothing chains and fast food stands, a familiar red and white striped awning caused me to stop abruptly with a gasp.  At first, I thought it was a mirage.  A Rita’s Water Ice stand, in Livermore, California? Surely, it could not be.  But there it was, an oasis in the Tri-Valley.  There was no line, shockingly, and I bounded up to the counter.  “I’d like a large cherry water ice, please!” I almost-shouted.  The girl at the counter seemed perplexed.  “I’m sorry, what?” she asked.  I tried to calm my excitement down a bit, and repeated my order more slowly.  She looked at me blankly.  “Water ice?” she asked.  I stared at her in disbelief.  “Water ice,” I repeated.  “Water ice.  Isn’t this Rita’s Water Ice?” I felt myself beginning to become a little hysterical.  “This is Rita’s Italian Ice,” she said carefully.  “Oh,” I replied.  “Okay.  Whatever.  I’ll have a large cherry Italian water ice then,” I said in consternation.  And despite the name hiccup, there it was, swiftly and perfectly produced, gloriously the same as always.

I floated around the remainder of the mall, spooning in small mouthfuls of water ice deliriously.  About halfway through, I started to feel a bit nauseous and had to sit down.  The intense heat had already turned half of the cup to liquid, and the glacier was capsizing.  I took a large gulp and stared at the pool of red with dismay.  Something didn’t quite feel right.  I dizzily got up and went back over to the Rita’s stand.  “Excuse me,” I said to the bored girl at the counter.  “Just so you know, it’s actually called ‘water ice,’ not Italian ice.  I know that people do things differently out here, but that’s the original name, and some people still know it as that.”  She stared at me for a few heavy seconds.  “Okay,” she said indifferently.  I stumbled away, tossing the all-liquid remains into the nearest bin, my triumph bleeding into sadness. 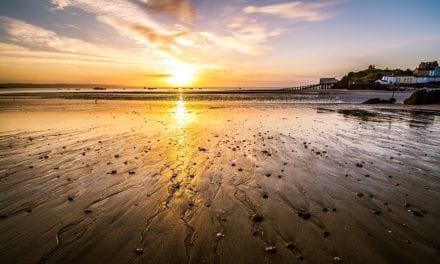 Directions for Use by Ken L. Jones 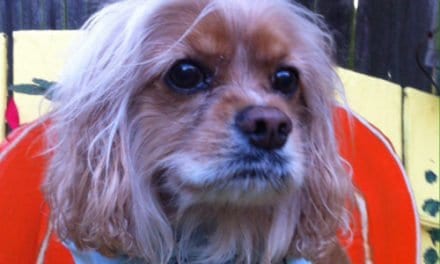 Playing it Forward: A Pup’s Perspective By Patricia Rossi 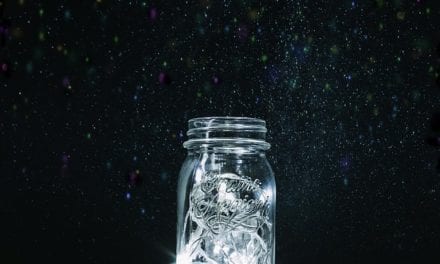 The Stars Sigh by Penny Wilson 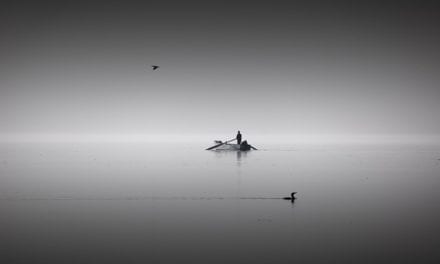 Devil’s Bird Comes Ahead of Bad Weather by Jamey Genna