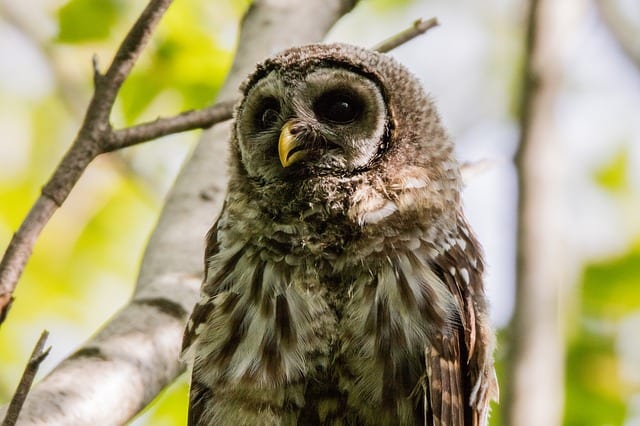 Anxious travelers clustered around the counter, piles of suitcases strewn throughout the lobby, blasts of cold air from the entranceway, the guttural rasping of snow plows as they clattered down the street. Sylvia glared at the hotel clerk, imagining the worst: his dreary announcement that there were no more rooms, a collective groan from those huddled around her. They’d be rounded up, crammed into vans, ferried down slushy streets to other hotels. Her eyes wandered over the faces behind her. They were silent and morose. Like we’re cued up to view a casket, she thought.

Nothing to eat for the past twelve hours; her head throbbed. A lousy ending to a lousy day, which came at the end of an even lousier trip.

The clerk flashed a wilted smile, asked for her photo identification and credit card. Sylvia didn’t dare to ask how many rooms were available or make small talk about the storm. After clicking on the computer, leafing through a pile of papers, he dropped an electronic key on the counter. “Room 1121.” The clerk motioned toward the far end of the lobby. “The elevators are past the piano, just beyond the restaurant.” Eyes on the next customer, he slid the key toward her. “Have a nice evening.”

Sylvia’s flight out of Kansas City was delayed five hours. Once on board, they sat at the gate for another hour, then on the runway 30 more minutes before taking off. Snowflakes the size of dinner plates spanked the windows. When the wings were blasted with deicer, the cabin grew silent. Once airborne, the plane pitched and rolled. She spent most of the trip concentrating on the horizon, breathing through her mouth, fingers gripping the seat rest. Two people, several rows back, got sick. Then the pilot announced they’d been diverted to Louisville. Greater Pittsburgh Airport was shut down.

Sylvia grabbed the electronic key, snatched up her bags, and plunged through the crowd toward the elevators. Once away from the desk, it was party time. The far of the lobby was awash with laughter and noisy conversation; everyone had a beer bottle or cocktail glass in hand. She scooted through a group of tall girls in basketball jerseys, slowed when a handful of preteens raced past, yelling and laughing, party balloons bobbing back and forth.

The visit to her parents had been a disaster. Of course, what would you expect when Mom had just been diagnosed with pancreatic cancer? And, dealing with Dad made it all the worse. Her father didn’t seem to comprehend the seriousness of her mother’s diagnosis, fretted about the cost, didn’t understand the treatment plan. When the doctor discussed pain medications, he worried about addiction. Oblivious to the fact that his wife of 35 years might be dead in a year. Or less. How could a man who couldn’t fry an egg cope with a dying woman?

On the last day of her trip back home, she joined three high school friends for dinner at an exotic East Indian Restaurant. It was supposed to be an antidote to the crisis as home, but it turned out otherwise. Marci, her best friend since the third grade, was about to be divorced and had spent the last few months in a ferocious custody battle over three teenaged children. Ellen, whom she had met in her Junior year, was twice divorced and now raising two children, one from each marriage. Plus, an adopted girl from China. One of her best friends from high school turned out to be gay. In a weird sort of way, that that was the only bright news. He was still with the guy he had met his freshman year in college.

Sylvia traipsed through a throng gathered around the restaurant entrance. Her pulse quickened when she inhaled the heavy aroma of roast beef, the faraway clatter of dishes and silverware. Well-dressed men stood in twos and threes, drinks in hand, eyes on the ladies. She imagined the calls back home:

“Can’t make it tonight honey—terrible snowstorm. They diverted us to Louisville.”

“Go on to La Traviata without me. I’ll listen to it on my Ipad and think about you. Yeah…give my ticket to Ellen.”

Tough deal for those guys: an expense account dinner, then follow the sound of music into the bar for a couple of drinks. Sleep in late tomorrow, roam the lobby, maybe hook up with a lonely lady. Nothing serious, just share a couple meals, chat about the job. Whatever.

Sylvia cut behind a row of marble columns, spotted an older woman, coat unbuttoned, pressed against a brass rail by the piano. Her headed nodded back and forth as the player, a tall man in a black suit, teased out Clair de Lune. Eyes closed, fingers white on the rail, oblivious to everyone and everything but the slow, liquid notes. Her luggage, a huge black suitcase with wheels and a soft briefcase, lay sprawled at her feet.

That lady, thought Sylvia, is not in the lobby of this hotel.

Sylvia swept past the piano, stopped by the elevators and joined other recent arrivals. All were anxious to shed traveling clothes, race to the lobby, grab a drink, stand in line for dinner. Or else brave the storm and seek out local food.

Sylvia recognized some ladies from the limousine ride. Likely they’d already called home, reminded husbands about leftover tuna casserole, salad fixings in the fridge, hamburger helper in the cupboard. From the couch or easy chair, husbands would nod, one eye on the weather channel, volume down low. After saying ‘goodbye’ and ‘love ya’ they’d consider other options: toss out the tuna dish, order a pizza, run down to the sports bar for a beer and burrito. After that, see if there was an open spot in the poker game at Bill’s house. Better yet, drive to the next county, sit on a worn vinyl seat, peer through cigarette smoke and watch the topless-bottomless show at the Gentleman’s Club.

Heads swiveled toward the lobby.

Molly. Sylvia glanced toward the atrium. Molly was by the piano.

The elevator door whooshed open and the women swarmed inside. They’re not worried about Molly, Sylvia thought.

She, four other men, and several basketball players, squeezed in behind. The doors closed. The elevator began to climb.

I know where Molly is, thought Sylvia. She’s not in the lobby, not stranded by a snowstorm. It’s early August and Molly is at Cedar Lake Camp, northern Wisconsin. She’s sixteen years old, walking next to Alfred, also sixteen. In the distance they hear Clair de Lune, being played on that old upright piano on the screened in porch of the Rec Center.

The red lights above the door winked on and off as the elevator ascended. They stopped on the fourth floor for the basketball players, on the seventh for a single man, on the tenth for three others. They heard loud voices as they passed the eleventh floor, an electric drill as they glided by the twelfth. The women gathered their luggage.

Sylvia’s eyes closed. On the last evening of camp, Molly and Alfred skipped the singalong, slipped down the twisting path to the beach. Up and over a bluff. The lake opened in front of them, they saw moonlight dance on the water, heard the gentle hush-hush of waves whispering onshore. The two of them kicked off their shoes, felt the cold sand skritch-skritch-skritching under their feet, inhaled the rich smell of decaying leaves, heard the peepers calling from the lagoon, the distant hoot-hoot-hoot of a barred owl.

As they walked, Alfred’s eyes flashed from left to right. He struggled to make conversation. Maybe they should have stayed at the Rec Center. He fretted about other campers. What if we see some of my friends—her friends? Would they come up and talk, invite us to play cards, watch a movie? Alfred and Molly leapt over a spruce log, and, having misjudged the terrain in fading light, landed ankle deep in a shallow puddle. They staggered, lurched, collided, struggled for balance. Albert touched Molly’s shoulder, brought her close, their lips touched. An off-center kiss. Their noses bumped, tongues nudged braces.

Molly couldn’t feel cold water on her ankles, the sharp gravel cutting into her heels; she couldn’t hear the screen door of a cabin bang shut, or the faint shouts of distant campers. She pulled Alfred closer; he murmured, stepped on her toes, shuffled backwards. They held a long embrace, then separated, drifted to the water’s edge, waded knee deep, water soaked their jeans. Their fingers intertwined, they kissed again.

The door whooshed open and the women burst onto the sixteenth floor.

The elevator door closed, and Sylvia rode to the top. She exited, stood by the floor to ceiling window, gazed at the Ohio River, automobile taillights on the bridge, coal barges creeping toward Paducah. She would ride down to the 11th floor later. No hurry. She needed to spend a little more time with Molly and Alfred. Stand with them at the edge of Cedar Lake, listen to the far away sounds of Clair du Lune, spring peepers, a barred owl, inhale the aroma of spruce needles and wet leaves.

All so many years ago. 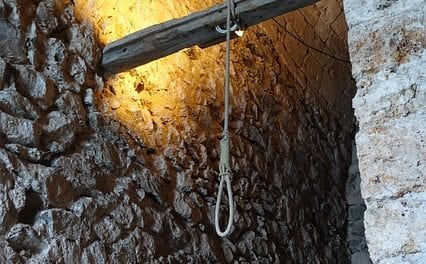 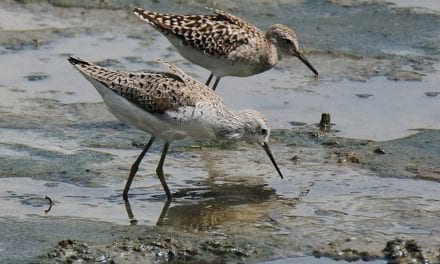 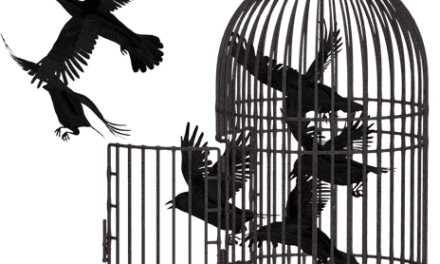 The Seventh Crow by Chip Jett 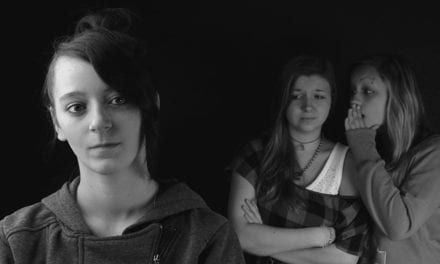 The Smoke (Break) by John Riebow